Dynamic’s Nick Hughes, discover the personality behind the person 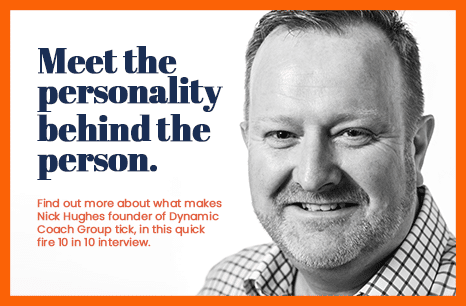 Nick good morning and welcome to your quick-fire 10 for 10. You are the founder and Managing Director of Dynamic Coach Group, so let’s jump straight in.

Q2: Many of us will recognise those Merseyside dulcet tones, which leads us on to the key question of, are you a red or a blue?
NH: To answer your question, there’s only one side of Merseyside, that is the blue side

Q3: I understand that you have become involved with a small local charity and your commercial skills have been brought in to help develop the charity’s financial improvements?
NH: Yes, so this is a charity in a village in which we live, being managed, and supported by the old generations in the village, who may be not as commercially aware as the charity needs. So, I was asked to join and become chairman to improve the commercial ability of the charity to help support the building used by the community and make it a more sustainable charity moving forward. Not just financially but also from an environmental perspective going forward.

Q4: Running a business is all-consuming at times Nick – how do you switch off, if you do – is there a passion you have outside of work?
NH: My wife will tell you there are two ways that switch off, I can put on TV, and I can watch TV for three hours and not actually tell you what I’ve watched, I call it my mind-numbing TV show – which she hates, but aside from that, it’s spending time in the fresh air walking to dog int the countryside. The other is a bit of a passion of mine is working with a U18’s youth football team, working as a coach with a local team, both during the week and then weekends as well.

Q5: What’s the one bit of advice you wish you’d have listened to or taken when looking back at the start of your business?
NH: I want to say I’m a bit of a planner, and I like to plan things out, not in their entirety but at least have a direction of travel and have many of the tasks either bottomed out or achieved to a point. I thought, when we came into business, we were well planned, and we had our first six months well truly planned out. My piece of advice, I give to colleagues, peers, and people setting up in businesses. When you think you’ve got that first six months, planned out, you haven’t. Everybody I speak to, say there are things that they missed, the things they didn’t understand, the things they hadn’t accounted for. So, plan, plan, and plan again. Things do move but the direction of travel should roughly stay the same. Once you have those goals, objectives, mapped out tested, tried, and tested again, ask someone else to look at you plans as well. But yes, a plan will and should change depending on what’s going on, particularly in some of the challenging times, we’ve had recently. The direction of travel for most businesses should be the same, but some of those short-term goals may alter, may be pushed back, or brought forward, or just ever so slightly between. In short, a plan should be your guide to your overall goal.

Q6: The pandemic certainly seems to have changed how businesses work – what have you seen with this – has it changed how sales teams are working or is there a bigger issue and the sector needs a complete rethink?
NH: If I can divide salespeople into two separate groups of people that we encounter on a regular basis. Group one is traditional salespeople, and they would be in a car for long periods each day, they would go and see customers up and down the country, obviously, this has changed over the last year or so and the skill set that they now need, is to engage digitally, online – the skillset changes from being faced to face and this is challenging for some of them. Those that can adopt and adapt to this hybrid are now seeing significant success. The other group of people I would suggest are probably millennials who have grown up with IT, Facebook, FaceTime, and Google Hangout, and similar. people that you used to video calling their friends for some period. They’re the people we’re seeing real success being driven from now because they used to this technological jump that we’ve made in the last 18 months which is probably accelerated six to 10 years’ worth of IT skills, and those guys are particularly good at using online skills, where they can then struggle is the challenge of interpersonal relationships, when it comes to meeting people. It can often come across as being a little bit awkward and rushed. So, to answer your question I don’t think specific sectors need a rethink, but the entire sales process does in most businesses if they haven’t pivoted or flexed in the last 18 months.

Q7: You’ve been an advocate of sales and marketing working more in line and as one unit, there is obviously a benefit, but what is the resistance or are businesses starting to understand the importance of both working in sync?
NH: The importance for a business that has both departments working together is paramount, closer collaboration will be the success of the business going forward. There are two things to address that are vitally important, some people might say there’s more. One is aligned goals for sales and marketing. Both teams are very often working on separate KPI’s and timescales businesses that have aligned sales and marketing strategies, they drive growth significantly harder and faster, and those businesses that aren’t aligned and I know that sounds obvious, but in most of the businesses I encounter, or have worked for in years gone by, that isn’t the case. The other one is around egos. So very often, marketing and sales are driven by quite egotistical and driven people. Dropping those barriers and trying to stop one department, dominating the other is the other challenge and if we can get sales and marketing, heads, or directors to work as one team I know that sounds obvious because they are both supposed to be on the same team, you will see significant growth in your business, where these two departments, effectively become one with shared goals and shared direction.

Q8: Is the perception of sales still seen as a dirty word to some, the Mondeo man driving up and down the M1 or are perceptions changing with the new tech digital generation?
NH: I think that there are two questions here firstly I think perceptions are changing around the new tech generation, and particularly in some recent research by Gartner global management consulting company. They established pre-pandemic that 45% of B2B buyers don’t want to see a salesperson, this number has grown in the pandemic to approximately 60% of b2b buyers or decision-makers, don’t really see the need to see commercial people face to face, they’re self-educating themselves by the internet. So that’s one part of the question for me. The days of Mondeo man are numbered unless they change. The other part of the question is sales a dirty word. Yes, I think it is. I think people don’t like to talk about it as a nation, we are a little bit shy around using the word sales or revenue. What is the first line on every P&L? Revenue it is the first one for a reason, the most important line is because if we don’t sell something we generally can’t derive a profit from it. So yes, I think there’s been a change in the word from sales to revenue recently to then continue intents and purposes, it’s the same thing.

Q9: OK only two more to go. If you could what would be the no1 sales tip you would give any business at any stage of growth?
NH: My one tip would be complacency. Don’t allow complacency to creep into your business and into your sales, particularly in your sales pipeline. We’re currently seeing lots and lots of businesses that have benefited over the last couple of years of significant growth. Nothing is guaranteed in life. And we’re starting to see some businesses lose significant clients because they become complacent about a revenue stream, how they have managed them, or even worse, the lack of management of those accounts, relationships or services. So, my one tip now would be complacency isn’t allow to creep into your business or into your pipeline.

Q10: And finally Nick – what is your guilty pleasure?
NH: Chocolate, I have a very sweet tooth so chocolates or sweets are my thing I’m afraid. Although I have to say that in the last 12 months my preference has changed to a lot darker chocolate in the last year or two. But you can’t beat a bar of Cadbury’s or Galaxy.

Thank you, Nick, for answering your quickfire 10 in 10. It’s been more insightful, and as for red or blue, we know truly which is the better team. Thanks again and look forward to seeing Dynamic Coach Group carrying on going from strength to strength.

What can we help you achieve?